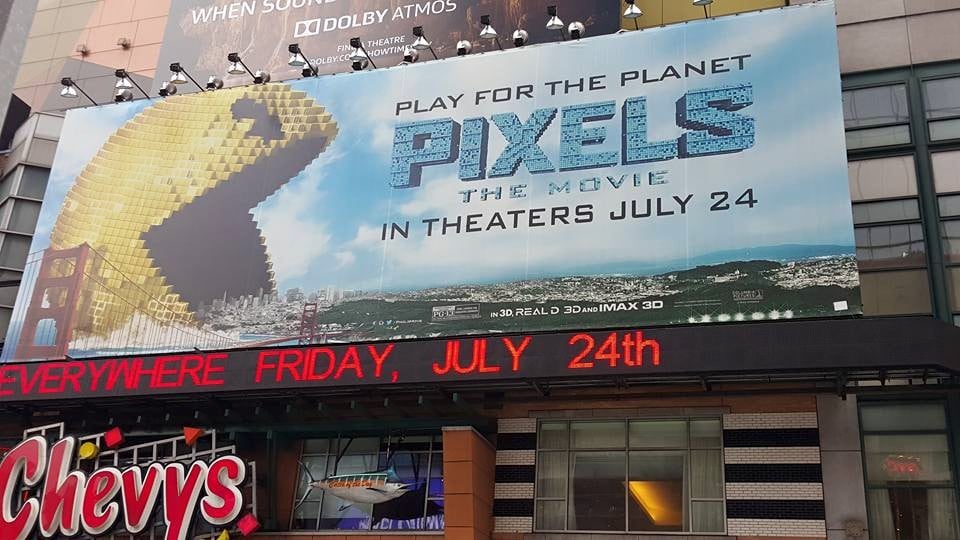 This week I was given an amazingly exciting opportunity to see the premier of the movie Pixels and to attend the press junket.  Press junket!!!!  Yes I would be interviewing, with a group of amazing bloggers, the cast of Pixels.  This included Adam Sandler, Kevin James, Michelle Monoghan, Josh Gad and the director/producer Chris Columbus.

Keep an eye out later in the week for my review of the film. But I can tell you I LOVED it!

The interviews were to take place early in the morning in Times Square.  I was so excited I could barely sleep! I have been a long time Adam Sandler and Kevin James fan. I literally have seen every movie Adam Sandler has been in.  I think I can probably say the same of Kevin James.  I fell in love with Josh Gad in The Wedding Ringer.  I adored Michelle Monaghan in The Best of Me.  Chris Columbus’s resume is more than impressive after having directed 3 of the Harry Potter movies and one of my all time favorite movies Mrs. Doubtfire.  His list is lengthy and worth reading up on. 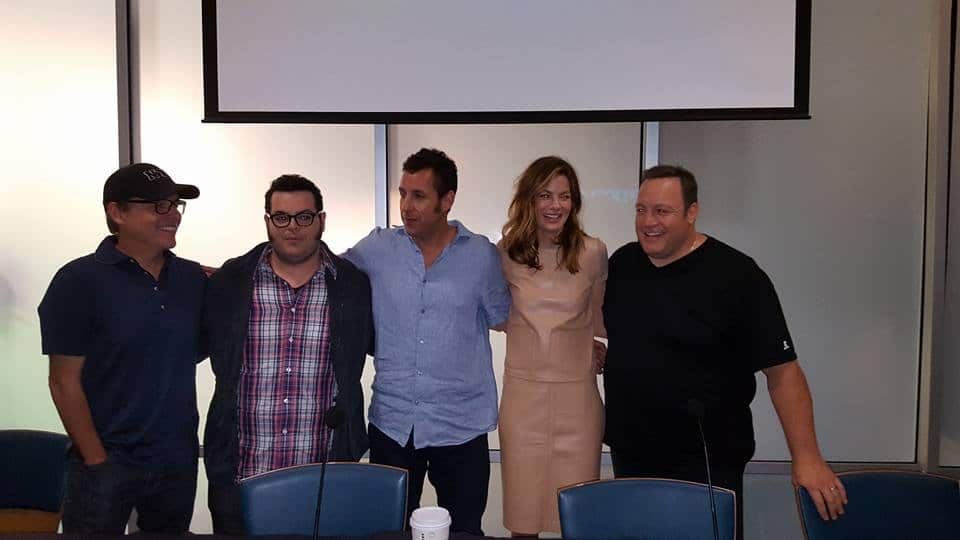 The interview begins and we really get to see everyone’s true personalities shine.  The chemistry between the stars was so apparent that we spent much of the time giggling with them as they joked with each other.

One of the wonderful bloggers with us was a sweet young lady (around 12 years old) who works with KidzVuz (we were all impressed!) asks:

Question: The movie is about video games so did any of you play constant video games in preparation for the film and if so what did you play?

Chris Columbus (director/producer) answers, only Donkey Kong and Pacman. He says these guys were experts though….

Adam says. When I was I don’t know, 10,11,12 arcades were a big deal. You got to go, there were girls there, you got some food, there were tough kids you tried to avoid. And I remember you got to take the bus, ours was downtown and was called The Electric Dream Factory, the same as in the movie. Your parents gave you $1, you could get to play 1 game for a quarter and have .75 cents to spend on a McDonalds hamburger. Or you played 4 games and had nothing to eat.

Kevin James chimes in… guess what I chose??

Kevin…. I never played. Kevin is cracking up now and says… they used to drop me off in front of the arcade and I just walked straight to McDonalds.

The chemistry between the cast was just adorable! They had us all cracking up the entire time. 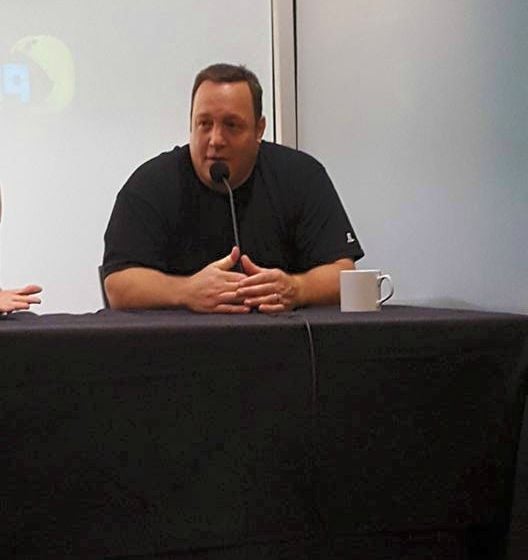 Question: The Donkey Kong scenes how did you shoot that? Did you use a green screen?

Adam says: Yea that was the best. We were pretty high up there. It was like a giant stage. That thing was about 70 feet high.

Chris says: We built that entire donkey kong platform. It was mind-boggling. We walked into the stage and it was stunning. These guys were in harnesses and they can explain how painful a process that was. We wanted to have a tangible set for these guys to perform on. It was a pretty grueling few days of shooting for these guys.

Michelle says: There were ladders and ramps and it was a little awkward when Chris is yelling ..okay there is a barrel coming and its on fire! Okay jump and then you are literally jumping into thin air. 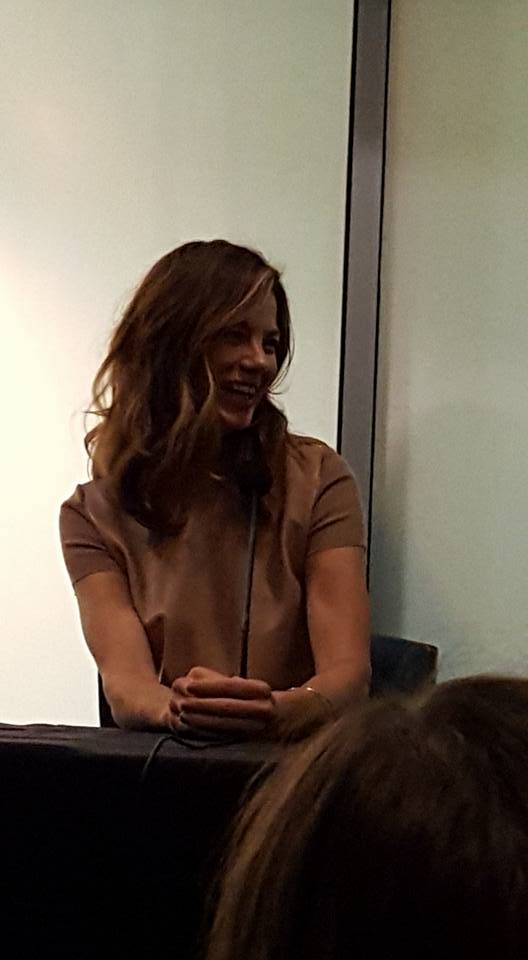 Question: How was it on the set every day because I am watching the movie thinking this would be crazy to make this movie with y’all because there would just be goofiness on the set.  (Check out her post for additional questions asked and answered)

Adam says, every combination was great. Everybody you were talking to was a great time. Hanging out. Everybody paired off or we were all hanging out together.

Kevin jokes about how Chris was the craziest because every day for lunch he would run like 6 miles while we all passed out.

As kids in the 1980s, Sam Brenner (Adam Sandler), Will Cooper (Kevin James), Ludlow Lamonsoff (Josh Gad), and Eddie “The Fire Blaster” Plant (Peter Dinklage) saved the world thousands of times – at 25 cents a game in the video arcades. Now, they’re going to have to do it for real. In Pixels, when intergalactic aliens discover video feeds of classic arcade games and misinterpret them as a declaration of war, they attack the Earth, using the video games as the models for their assaults — and now-U.S. President Cooper must call on his old-school arcade friends to save the world from being destroyed by PAC-MAN, Donkey Kong, Galaga, Centipede, and Space Invaders. Joining them is Lt. Col. Violet Van Patten (Michelle Monaghan), a specialist supplying the arcaders with unique weapons to fight the aliens.

[…] Here I am playing one of my favorites at Dave & Busters Times Square before interviewing Adam Sandler, Kevin James, Michelle Monoghan, Josh Gad and the director/producer Chris Columbus.  (Please read my interview post, you will fall in love with them all just like I did) […]