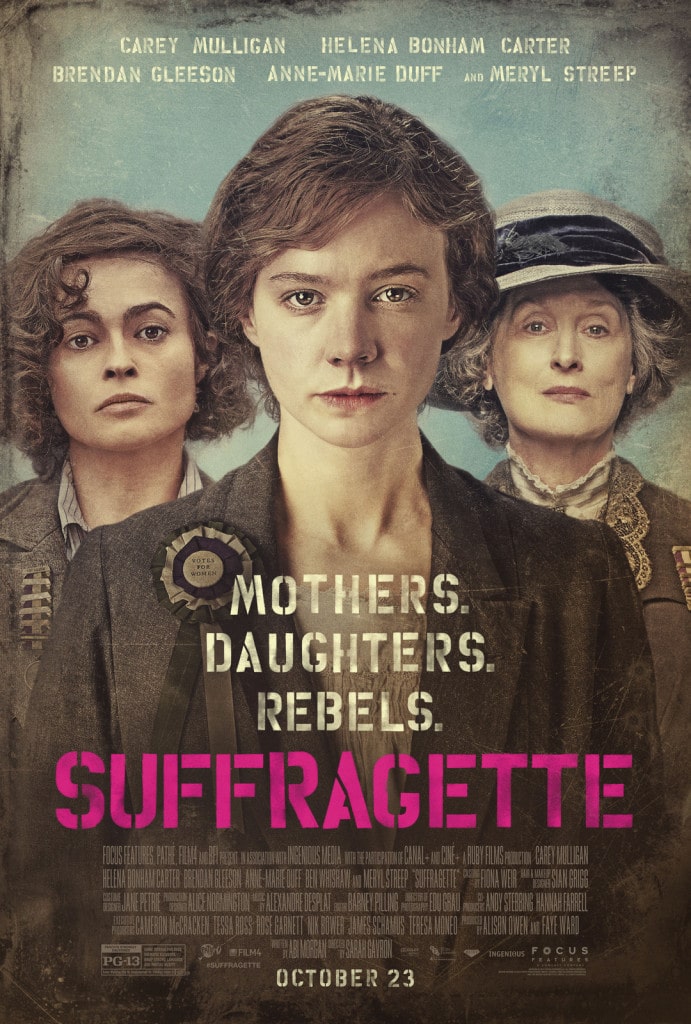 Suffragette is officially in theaters!!!

With an all-star cast including Carey Mulligan, Helena Bonham Carter, Brendan Gleeson, Anne-Marie Duff, Ben Whishaw and Meryl Streep as Emmeline Pankhurst, SUFFRAGETTE is the powerful and thrilling first film about the remarkable untold story of the real foot soldiers of the Suffragette movement. These women were not primarily from the genteel educated classes, they were working women who had seen peaceful protest achieve nothing. Radicalised and turning to violence as the only route to change, they were willing to lose everything in their fight for equality – their jobs, their homes, their children and their lives. Maud (played by Carey Mulligan) was one such foot soldier. The story of her fight for dignity is as gripping and visceral as any thriller; it is also both heart-breaking and inspirational.

The time is 1912.  The U.K. is seeing an increased public presence of the Suffragettes, whose rallying cry is “Votes for Women!”  Their efforts at resistance over the years have been passive but as the women face increasingly aggressive police action, they engage in public acts of civil disobedience endangering property – but never human life.  The epicenter of their national Women’s Social and Political Union (WSPU) is in London, where Maud Watts (Carey Mulligan) is a working-class wife and mother; she and husband Sonny (Ben Whishaw) toil at a laundry.  Startled one day by a protest, Maud recognizes a co-worker, Violet Miller (Anne_Marie Duff), among the agitators.  Initially unwilling to get involved in the Suffragette cause, Maud comes to realize that she must claim her dignity both at home and in the workplace.

Maud is not alone, as brave women from all walks of life have joined the fight for equality.  Pharmacist Edith Ellyn (Helena Bonham Carter) and upper-class Alice Haughton (Romola Garai) coordinate WSPU grassroots efforts.  Maud’s commitment to the movement is tested by giving testimony before Parliament, Violet Miller was supposed to testify but was unable to speak due to another vicious beating by her husband the night before.  Violence against women and girls was such common place both at the workplace and at home that change was desperately needed.

Maud’s dedication is repeatedly tested and lead her to make hard and heartbreaking choices that will change her own life forever.  She strives to effect real change for generations to come at such great sacrifice.

After previewing the movie we were invited back to the historic Waldorf-Astoria in NYC for High Tea with the women behind Suffragette.  What better way to finish off an afternoon of seeing such a strong powerful movie then sitting and having high tea with the strong powerful women who fought to have this movie created.  To say the day was awe-inspiring would be a complete understatement.

As a woman who completely considers herself a feminist, I felt myself just in complete admiration of each of the women we met with.  I had no idea how much I had to learn.  How much I had to learn about being a feminist.  What does that truly mean?  I had no clue about the complete sacrifices that were made by women so that we can consider ourselves feminists and have the simple right to vote. Have the simple right to be equal to man. To have the simple right not to beaten, arrested, raped, humiliated, work for pennies, abused at work, abused at home and the ultimate worst of all the right to our own children.

How could I call myself a feminist and not really know the truth to the fight that took place to gain me these simple rights.   I am not alone and that is why this movie is so important.  So powerful.  Such an awakening for all women.  Such an inspiration.

The attendees of this luncheon could not have been better selected.  Besides for the incredible women that helped create this life changing movie, I was surrounded by some of the most respected bloggers.  I was proud to be sitting with each and every woman at the high tea.  Truly proud! 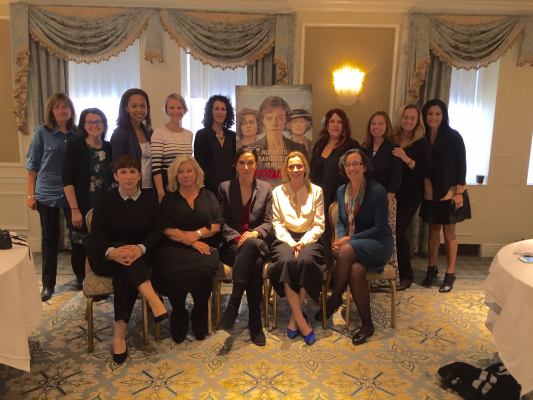 A line in the movie that resonated deep in my heart and soul….. Emmeline Pankhurst (Meryl Streep) says to Maud (Carey Mulligan) “Never surrender.  Never give up the fight.”  I promise!

A special thanks to Sarah Gavron, Abi Morgan, Alison Owen, Faye Ward and Helen Pankhurst (great-granddaughter of Emmeline).  Without these incredible women this movie would not be.

Overall thoughts of the movie:  While this movie requires lots of tissues and will move your soul deeply, it is a must see!  As a woman, mother, and daughter I feel a complete obligation to  persuade everyone to see this movie.  I easily call this the most important movie of the year.  “Never surrender.  Never give up the fight.”  I promise!
Rating: 🍒🍒🍒🍒🍒